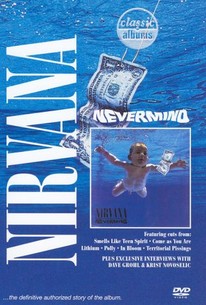 Alternative rock, the nervy younger brother of punk rock, was relegated to the margins of the record industry through the 1980s, but that changed dramatically in 1991, when Nevermind, the second album from a noisy Seattle trio called Nirvana, unexpectedly became one of the biggest sensations of the year. The album would eventually sell ten million copies in the United States alone, spearheading the grunge revolution, and changing conventional wisdom about what sort of music had the potential to be "commercially viable." Nirvana: Nevermind is a documentary from the Classic Albums series that offers an in-depth look at the making of this highly influential record. Featuring exclusive interviews with surviving bandmembers Dave Grohl and Krist Novoselic, the film also includes contributions from producer Butch Vig, Jonathan Ponneman, and Nils Bernstein from Sub Pop Records (the label that released Nirvana's first album), Thurston Moore of Sonic Youth (a friend and tourmate of the band), and others who discuss the creation of this landmark album, and the life and career of frontman Kurt Cobain.

There are no critic reviews yet for Classic Albums: Nirvana - Nevermind. Keep checking Rotten Tomatoes for updates!

There are no featured audience reviews for Classic Albums: Nirvana - Nevermind at this time.