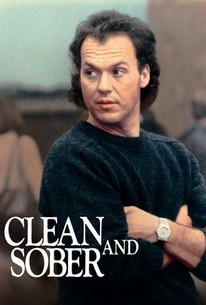 The directorial debut of Glenn Gordon Caron, the creator of the television series Moonlighting (1985-89), this intense, gritty drama was received as one of the best-ever cinematic treatments of substance abuse. Michael Keaton stars as Daryl Poynter, a hustling, successful Philadelphia real estate agent who has become addicted to cocaine. He's already got problems, including nearly a $100,000 embezzled from his employer and lost on the stock market, when he wakes up one morning with a young woman dead in his bed from a coke overdose. His company is asking questions about the missing funds, and the dead girl's father is plastering his neighborhood with posters accusing Daryl of being a murderer, so he decides to hide out in an anonymous drug treatment program. There, however, Daryl runs into tough-minded counselor and former addict Craig (Morgan Freeman), who has heard all of Daryl's lies and tricks before. Daryl also finds romance with an abused fellow addict, Charlie Standers (Kathy Baker), and understanding with his Alcoholics Anonymous sponsor (M. Emmet Walsh).

David A. Kimball
as Doctor

Michael Francis Clarke
as Board Executive

Doug MacHugh
as Board Executive

Jean Nash
as Rita
View All

Critic Reviews for Clean and Sober

Audience Reviews for Clean and Sober