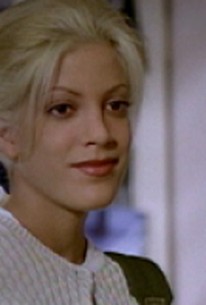 Beverly Hills 90210 star Tori Spelling and Star Trek: Voyager actress Jeri Lynn Ryan headline this made-for-TV movie about a hardworking college student who thinks she's found the answer to her financial and self-esteem issues when she falls into the lifestyle of a high-priced escort. Lonely, plain-Jane, cash-strapped Joanna Halbert (Spelling) attends university classes while also helping out at the bakery run by her no-nonsense, widowed mother, Teri (Susan Blakely). When her classmates jokingly leave Joanna's name and number on the voicemail of a Malibu escort service, Joanna finds her curiosity piqued. After finding a new best gal pal in the form of the vivacious escort Kimberly (Ryan), Joanna soon finds herself working for Kimberly's boss, Ron Tamblin (Scott Plank), who promises her that she doesn't have to sleep with the clients she "dates." Soon, Joanna is dressing like a grown-up, stepping out with fabulous men -- and getting paid hundreds of dollars a night for her trouble. This secret double life soon, however, takes a toll on Joanna's relationships with her mother, her friends and her would-be beau, Jack (Barry Watson). Although Joanna chooses to sleep with one of her clients, she refuses to sleep with another. But when Ron threatens to fire her, she acquiesces, and soon Joanna finds herself going on more dates where the sex is not only compulsory, but kinky. When she tries to quit, violence ensues, ultimately leading Joanna to criminal court, where she must defend herself against a charge of attempted murder. After first airing on CBS in 1996, Co-Ed Call Girl enjoyed a second life on cable, including the Lifetime network.

Dell Yount
as Man in Hotel

Paul Kaufman
as A John
View All

There are no critic reviews yet for Coed Call Girl. Keep checking Rotten Tomatoes for updates!

There are no featured audience reviews for Coed Call Girl at this time.