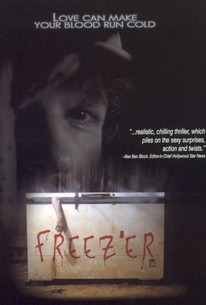 One moment of rage leads a man into a web of danger and deceit from which he cannot free himself in this independent thriller. J.M. (Barnes Walker III) and Andrea (Laurence Avenet-Bradley) are a couple who are about to celebrate their first year of marriage. Andrea, however, isn't especially well suited to fidelity, and one night J.M. comes home to find her with another man, Danny (Kendall Dreyer). Danny quickly runs off, and J.M. and Andrea begin fighting; in a fit of rage, he hits her in the head with a baseball bat and discovers to his horror that he's killed her. Frightened and unsure of what to do, J.M. puts Andrea's body in the trunk of his car and heads up to his sister's farm, leaving her a telephone message saying that they'll be celebrating their anniversary. J.M. arrives at the remote farm to discover he's not alone; John (John L. Altom) is a scruffy local who looks in on the farm when J.M.'s sister is away, and John's wife, Julie (Carrie Walrond), sometimes hides out there when she needs to get away from her violent and short-fused spouse. Once John leaves, Julie shows up, and J.M. lets her spend the night; the next morning, John returns after Julie has gone, and J.M. is still trying to decide out what to do with Andrea's body. In the barn, J.M. discovers an old chest freezer and figures it would be a good place to hide his wife's remains, though this soon proves to be a poor decision after John and Julie start poking around, and Danny comes looking for Andrea. Writer and director Brian Avenet-Bradley also appears in a small role as Bud, an inquisitive neighbor.

There are no featured audience reviews for Cold Blood at this time.