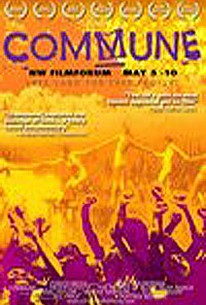 During the social upheaval of the early 1970s, utopian communities dotted the American landscape. They aimed to reshape the world with "free love" and common property, and they excited controversy and fear amongst local residents across the country. Premised on the idea of "Free Land for Free People," and financed by the largesse of Hollywood celebrities, the founders of Black Bear bought land deep in the wilderness and raised a rough-hewn homestead. Over the years, hundreds would join the community, and life would be complicated by conflicts about the role of women, child-rearing, proper communalist behavior, the FBI and, most traumatically, a child-snatching cult. Although the idea of communes is now often relegated to a naive past, "Commune" documents a successful and lasting, if controversial, legacy at the Black Bear Ranch--and provides a window on the social and economic forces that have fueled the resurgence in communal living. Although they now call themselves "intentional communities," which are often rooted in practical considerations as much as ideology, all kinds of groups--including eco-conscious grad students and forward-thinking retirees--now carry on the legacy of cooperative living.

Critical Consensus: "Borat" Best Reviewed Film Of Year: High-Five!; "Flushed Away" Worth A Spin; "Santa Clause 3" Gets Coal
View All