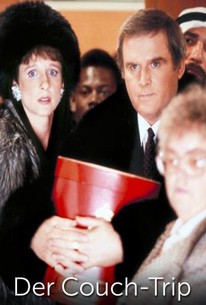 Michael Ritchie's The Couch Trip follows a long line of Hollywood films (One Flew Over the Cuckoo's Nest, The Disorderly Orderly) in which the psychos are seen as saner than the psychiatrists. Charles Grodin plays Dr. George Maitlin, a pompous radio self-help guru, who is having his own personal mental breakdown. Maitlin's lawyer puts in a call to a Cicero, IL, mental facility and the telephone is answered by schizophrenic mental patient John Burns (Dan Aykroyd). Thinking Burns is a crony of Maitlin, Burns is offered the job of replacing Maitlin during his recovery. Of course, Burns accepts the job. Immediately jetted to Los Angeles, Burns meets panhandler Donald Becker (Walter Matthau) at the airport. While wearing the garb of a priest, Becker sounds off against the madness of societal conventions; Burns takes to him immediately and they become fast friends. When Burns assumes command of the airwaves in Maitlin's place, his words of wisdom are so obvious and commonsensical that he is an overnight sensation. Meanwhile, in London, where Maitlin is convalescing, he gets wind of Burns' success. With renewed vigor and outrage, Maitlin leaves his recovery room and hops on a plane back to Los Angeles in an effort to recover his radio show.

Susan Kellermann
as Woman on Bus

June Claman
as Lady at Riviera

Michael Gregory
as Security at Riviera

Jan Cobler
as Woman at Party

Adrian Aron
as Woman at Party

Ralph Adano
as Person at Party

Johnny Sinclair
as Clerk in London

Kenneth Danziger
as Clerk in London

Critic Reviews for The Couch Trip

Audience Reviews for The Couch Trip