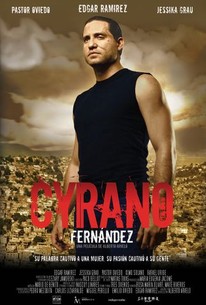 Writer/director Alberto Arvelo transplants Edmond Rostand's swashbuckling tale of misplaced love to the cramped slums of Caracas with this tale of a smitten gangster who longs for the affections of an impossibly beautiful local girl. Cyrano Fernandez (Edgar Ramirez) is a true romantic and die-hard idealist whose devotion to the concept of courtly love fuels his passion for life while simultaneously serving as his Achilles' heel. His is a world of corruption, murder, and poverty; a tragic place that could be rendered all the more livable were he somehow able to win the heart of a local beauty named Roxana (Jessika Grau). When he's not crafting clandestine declarations of love to the unsuspecting Roxana, Cyrano moonlights as a ghostwriter for a local rapper. Rising tensions among the local crime syndicates come to a head with the sudden arrival of a handsome young man named Christian (Pastor Oviedo), who quickly wins Roxana's affections with more than a little help from the selfless Cyrano, yet whose mere presence in the slums is about to spark a violent gang war. ~ Jason Buchanan, Rovi

There are no critic reviews yet for Cyrano Fernández. Keep checking Rotten Tomatoes for updates!

There are no featured audience reviews for Cyrano Fernández at this time.