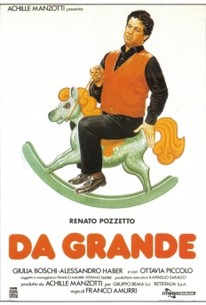 Before Penny Marshall brought Big to the big screen, an Italian director, Franco Amurri, released this body-changing movie. In his story, Marco (Ioska Versari) is a bedwetter whose mother scolds him one time too often, and his classmates tease him one time too often. The finishing touch is that his father neglects to bring him a Lego set for his birthday. He promptly puts all his heart into wishing he were big and not subject to these indignities. The result is that he bursts through his clothes in the guise of a middle-aged man (Renato Pozzetto) and seeks refuge in the house of his former schoolteacher. Mentally, he is still eight years old, and it's a puzzle what to do with him until someone discovers that he has an uncanny rapport with children. Then he becomes a full-time babysitter -- at least, until he is suspected of abducting the by-now long-missing child Marco. ~ Clarke Fountain, Rovi

Alex Partexano
as detective
View All

There are no critic reviews yet for Da grande. Keep checking Rotten Tomatoes for updates!

There are no featured audience reviews for Da grande at this time.