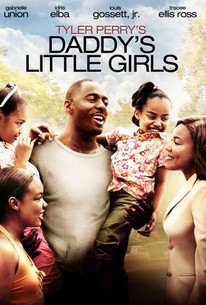 Daddy's Little Girls boasts fine performances and a poignant message, but is ultimately let down by amateurish filmmaking.

Diary of a Mad Black Woman mastermind Tyler Perry turns the familiar Cinderella tale on its head with this story concerning a successful female attorney who falls in love with a financially strapped mechanic. Monty (Idris Elba) is struggling mechanic and single father of three from a poor neighborhood. Upon learning that custody of his beloved daughters has been awarded to his morally bankrupt, drug-dealing ex-wife Jennifer (Tasha Smith), desperate Monty enlists the aid of beautiful Ivy league-educated lawyer Julia (Gabrielle Union) -- whom he recently met during his brief stint as a chauffeur -- in ensuring that his daughters remain with him in a stable and loving environment. Despite the vast social and economical differences that divide them, Monty and Julia soon begin to find themselves unexpectedly falling in love with one another as they work together to save Monty's daughters from a life of crime and corruption. Now, in order to reconcile their blossoming romance and overcome the forces that threaten to destroy the only thing that Monty holds dear, the concerned father and powerful lawyer will have to bridge the gap that divides them by coming together to prove that true love really does have the power to prevail. ~ Jason Buchanan, Rovi

Sasha the Diva
as Club Lady 3