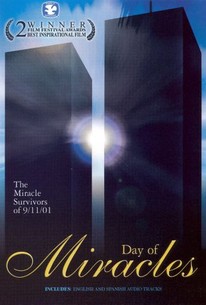 For anyone curious to hear about the miraculous events that unfolded during our nation's darkest hour, this documentary exploring the stories largely ignored by the mainstream press explores the many strange "coincidences" that occurred on and around September 11, 2001. From the woman whose husband was on United flight ninety-three and who prophesized that he would perish in some tragedy related to the White House to the man who survived despite being on the top floor of the first building hit, the woman who died while being rescued and came back to life, and the Hispanic woman who begged the lord for help only to find him intervening in the most unlikely of manners, this release will prompt viewers to question everything they every thought they knew about that fearful and fateful day.

Critic Reviews for Day of Miracles

There are no critic reviews yet for Day of Miracles. Keep checking Rotten Tomatoes for updates!

Audience Reviews for Day of Miracles

There are no featured audience reviews for Day of Miracles at this time.