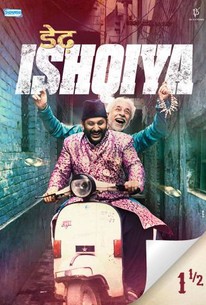 Taking on from where we left off, Dedh Ishqiya discovers yet another escapade of Khalujan (Naseeruddin Shah) and Babban (Arshad Warsi), a poetic journey underlined with revenge, drama and deception. The Begum (Madhuri Dixit-Nene) of Mahmudabad is hosting a festival of poetry and music in her mansion. The country's best poets are in town. Khalujan posing as the Nawaab of Chandpur, is participating as a poet in the festival. He is not there merely to show off his poetic wares but to impress the widowed Begum who, as the grapevine suggests, is scouting for a husband -preferably a poet. Babban (Arshad Warsi) arrives in Mahmudabad to take Khalujan back to their old life but his plans change the moment he sets his eyes on Begum's maid and confidant, Munira alias Muniya (Huma Qureshi), a brash and sexy young woman. Muniya too has plans of her own. She leaves the palace every now and then in a disguise to meet gangsters in dark alleys. The palace is rife with intrigue. The shayari is dropped for the guns, daring chases and hidden intentions. In the end, love triumphs even if the players of the story do not.(c) Official Facebook