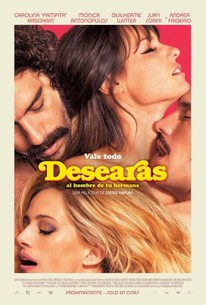 Lucia and Ophelia would never have been friends, it was their turn to be sisters. It's Lucia's wedding day. He will marry Juan, his partner for four years. Carmen, the optimistic and denying mother, decides to invite her daughter Ophelia to the wedding of her first-born, wanting to put an end to the rivalry between the sisters who have not known each other for seven years. Ofelia arrives at the wedding accompanied by her partner, Andrés, both live isolated in the middle of the Amazon jungle. The sisters are again pushed by the wishes of others. They return to be prey to that trap. Ofelia becomes more calm but more animal, primitive, free and dangerous. Lucia, strong and territorial, feels powerful although there is something she can not control: the desire of her husband. Ofelia and Juan are desired from the first look and so the sisters face the nature that separated them: Ofelia, the stormy, the fragile, was also the freest when it came to exploring her sexuality. Lucia always enjoyed through her sister. He spied it, he was voyeur and disciple. The encounter between John and Ophelia begins as a disturbing fantasy in the minds of the three, until the bodies ask to join. The two couples live a shared honeymoon in "La Dreamed" cliff house. There, the sex between Ophelia and Andres, and, between Juan and Lucia, becomes escape, discharge and exorcism but the sisters know that they are condemned to desire the same man.

There are no featured audience reviews for Desire (Desearás al hombre de tu hermana) at this time.