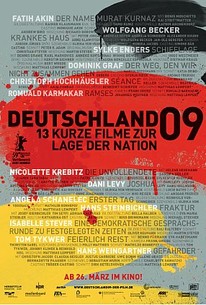 Thirteen noted German filmmakers offer their impressions of the past, present and future of the land they call home in this anthology. Coordinated by Tom Tykwer, Deutschland 09, 13 kurze Filme zur Lage der Nation is comprised of thirteen twelve-minute films, each from a different director and each focusing on an individual aspect of Germany's political and social reality, spanning the six decades that encompassed World War II, the post-war "Economic Miracle," the tumult of the 1960's, the fall of the Berlin Wall, the reunification of the two Germanys, and the new era of reform that emerged in the 21st Century. Featuring both dramatic and documentary segments and running the gamut from comic sketches to a fictive conversation between Susan Sontag and radical terrorist Ulrike Meinhof, Deutschland 09, 13 kurze Filme zur Lage der Nation includes contributions from Fatih Akin, Wolfgang Becker, Sylke Enders, Dominik Graf, Martin Gressmann, Christoph Hochhäusler, Romuald Karmakar, Nicolette Krebitz, Dani Levy, Angela Schanelec, Hans Steinbichler, Isabelle Stever and Hans Weingartner as well as Tom Tykwer. Deutschland 09, 13 kurze Filme zur Lage der Nation received its world premiere at the 2009 Berlin International Film Festival. ~ Mark Deming, Rovi

There are no critic reviews yet for Deutschland 09 - 13 kurze Filme zur Lage der Nation. Keep checking Rotten Tomatoes for updates!

There are no featured audience reviews for Deutschland 09 - 13 kurze Filme zur Lage der Nation at this time.