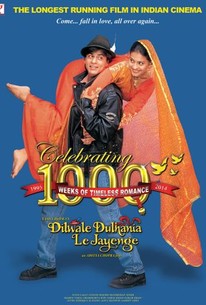 Dilwale Dulhania Le Jayenge (Brave Heart Will Take the Bride) was a huge hit in India, and won all the major Filmfare Awards. It was also the film that catapulted Shahrukh Khan to Bollywood superstardom, and it was the first of several successful pairings of Khan and Kajol. Khan plays Raj, a likeably goofy rich Indian boy, brought up in London, who's had everything handed to him in life. Kajol is Simran, a proper Indian girl who also lives in London. Her stern father (Amrish Puri) has arranged for her to go to back to his sorely missed homeland in Punjab to marry the son of an old friend. Simran persuades the old man to let her go off on a month-long trip to Europe with her girlfriends before she weds. On the trip, Simran meets Raj, and naturally they don't get along at first. He humiliates her with his pranks, and she refuses to loosen up. Then they get stranded together, get drunk together, sing and dance together, and begin to develop feelings for each other. They return to London, each hoping the other will express his/her love. They part, and when Simran's father overhears her telling her mother (Farida Jalal) about Raj, he gets angry and demands that they leave for India immediately. But Raj follows them there, determined to win over Simran's father and take Simran as his bride. He ingratiates himself with the dimwitted groom, Kuljit (Parmeet Sethi), and enters the household as his friend. Things get even more complicated when Kuljit's family mistakenly believes that Raj is interested in the groom's sister, and they begin to plan a double wedding. The film was the directorial debut of Aditya Chopra, and the hit soundtrack was composed by the writing team Jatin-Lalit.

There are no critic reviews yet for Dilwale Dulhania Le Jayenge. Keep checking Rotten Tomatoes for updates!