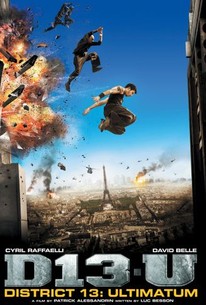 District 13 bites off more than it can chew with its political subtext and questionable script, but the many action sequences are never less than entertaining.

The loud, intense, and explosive action saga Banlieue 13: Ultimatum is a sequel to the 2004 European blockbuster Banlieue 13. This second installment was directed by Patrick Alessandrin but initially gestated from the vision of writer-producer Luc Besson, also responsible for scripting and producing the first go-round. Ultimatum unfurls three years after the original, in the slightly dystopian realm of suburban Paris, circa 2013. Ultra-violence now riddles that sphere -- to such a degree that cops have imposed a lockdown on the area, to little avail. Significantly, the neighborhood is also formally subdivided into ethnic enclaves, including Arabic, Asian, Caucasian, and African. As the tale opens, a crack team of rogue cops pulls off a police assassination inside of the district, prompting the police chief (Daniel Duval) to try to persuade the president (Philippe Torreton) to bulldoze the area and let the cops cash in on the turf's real estate value. In response, two of the said rogues, Damien (Cyril Raffaelli) and Leito (David Belle), hit the streets, guns blazing, and exude all of the force at their disposal to save the region from complete obliteration.

Steeve Ly
as Manuel
View All

Young Frankenstein, City of God, Mean Girls, and More Certified Fresh Movies on Netflix and Amazon Prime
Critics Consensus: From Paris With Love Is Not Bon
View All