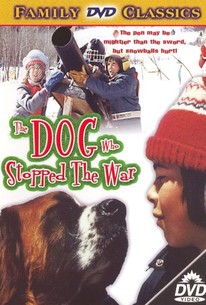 The Dog Who Stopped the War (La Guerre des Tuques)

The Canadian Dog Who Stopped the War is a children's film. More specifically, it is a children's Christmas film, and as such proved popular on the American cable-TV market. Even more specifically, it is an allegory, though not a heavy-handed one. Engaging in an after-school snowball fight, a group of kids learn a valuable lesson about the horrors of war-and, as indicated by the title, a little dog shall lead them. Cedric Jourde and Julien Elie head the cast.

Steve Savage
as Maranda
View All

There are no critic reviews yet for The Dog Who Stopped the War (La Guerre des Tuques). Keep checking Rotten Tomatoes for updates!

There are no featured audience reviews for The Dog Who Stopped the War (La Guerre des Tuques) at this time.