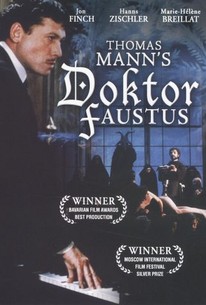 Doktor Faustus was adapted from Thomas Mann's epic novel of the same name about a composer, Adrian Leverkuehn (Jon Finch), who sells his soul to the devil for the acquisition of genius in his lifetime. Leverkuehn intentionally contracts syphilis from an infected prostitute because he believes that a side-effect of the disease is intense, sustained creativity; no matter that death from syphilis as it enters the brain is extremely unpleasant -- the composer wants his moment of greatness. That is where Satan comes into the picture, and Leverkuehn agrees to Satan's terms in exchange for creative genius: he is not to have any close human contacts. Being only too human, the composer violates the terms only to see his two closest friends, a cellist and his little nephew, die as a consequence. At this point, after extensive philosophizing and rumination, the Satanic deal just does not have the same allure, and Leverkuehn's own life is quickly deteriorating, much faster than he can handle.

There are no critic reviews yet for Doktor Faustus. Keep checking Rotten Tomatoes for updates!

There are no featured audience reviews for Doktor Faustus at this time.