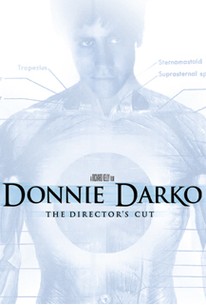 Retaining the hauntingly enigmatic atmosphere of its prior incarnation, Donnie Darko: The Director's Cut offers a more satisfyingly realized sense of mythology and theme.

In a funny, moving and distinctly mind-bending journey through suburban America, one extraordinary but disenchanted teenage is about to take Time's Arrow for a ride. October 2nd, 1988: just another ordinary day in Donnie Darko's teen-aged existence. He's taken his medication, watched Dukakis & Bush debate, and had dinner with the family. Then an outrageous accident occurs, which just misses claiming Donnie's life. As Donnie begins to explore what it means to still be alive, and in short order to be in love, he uncovers secrets of the universe that five him a tempting power to alter time and destiny. From 26 year-old first time writer-director Richard Kelly comes the provocative DONNIE DARKO, a genre busting fable that blasts the American suburban drama into a wildly imaginative realm of time travel, alternative universes and the manipulation of one's fate. But at the core of DONNIE DARKO is the simple story of a boy trying to make a stand in a lonely, chaotic world - and discovering that every little thing he does counts on a cosmic scale. Originally screened at the 2001 Sundance Film Festival, DONNIE DARKO became one of the festival's most talked-about and debated films, praised for blending sci-fi fantasy with an original vision of a modern suburbia teetering on the edge of dread and disaster. The question became: what is DONNIE DARKO? Is it a look back at the underbelly of the Ferris Bueller and Back to the Future era? Or is it a wild journey into multiple realities and multiple outcomes? Is it the story of an increasingly cynical, hypocritical society on a crash-course with apocalypse? Or is it a fairy-tale about a teen hero who changes the world around him? Is this the cosmic death knell of the Regan Era, or a portrait of a troubled community redeemed by the hand of God? The surprising answer is that DONNIE DARKO is all of these - a deep inquiry into the recent past and the possibilities for the future all wrapped up in the story of a teenager unlike any you've met before. Writer/director Richard Kelly purposefully wanted DONNIE DARKO to be vast enough to mean different things to different people. But he offers this guidance for the mind-blowing ride ahead: "Maybe it's the story of Holden Caulfield, resurrected in 1988 by the spirit of Philip K. Dick, who was always spinning yarns about schizophrenia and drug abuse breaking the barriers of space and time. Or it's a black comedy foreshadowing the impact of the 1988 presidential election, which is really the best way to explain it. But first and foremost, I wanted the film to be a piece of social satire that needs to be experienced and digested several times." DONNIE DARKO - THE DIRECTOR'S CUT features 20 minutes of never-before-seen footage; new & enhanced visual effects and new music. -- (C) Newmarket Films