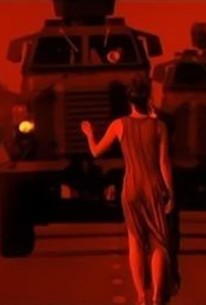 Across the lonely wastelands of South Africa's Nambian desert a stranger walks searching for suicidal souls to plunder. This stylish supernatural thriller chronicles one such encounter with the mysterious "Dust Devil." It all begins as the stranger kills a despondent woman and uses her blood to render magical symbols on the walls of her home before he burns it. A policeman, Ben, looks into this and other similar murders; he consults a pathologist and a local shaman and together they deduce that an unearthly being is behind the mayhem. Meanwhile, Wendy Robinson, another unhappy wife leaves her husband. She is driving down an empty road when she sees the stranger and offers him a ride. He tells her his name is Hitch and together they continue down the road. That night, Wendy considers suicide in her motel room, while Hitch patiently waits nearby. Wendy's husband Mark is busy trying to find her. Later, the curious woman rifles through Hitch's bag and finds a box full of human fingers. He finds her and attacks, but during the struggle, she escapes into the night. Enraged, he assumes his true form and follows her. In the end, the three protagonists have a climactic conflict in an abandoned desert town and tragedy ensues.

Isaac Mavimbela
as Farmhand
View All