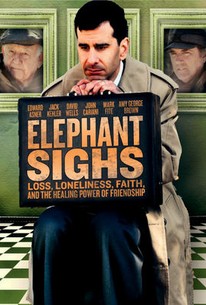 A lonely man finds friendship in the last place he expected in this gentle comedy from writer/director Ed Simpson. A serious man with no friends to speak of, Joel Bixby (John Cariani) moves to a small town and strikes up a friendship with vociferous senior Leo Applegate (Edward Asner). When Leo invites Joel to join a small group of men who regularly gather in a small room to exchange stories, Joel sees it as a good opportunity to come out of his shell. But the more time that Joel spends with the group, the clearer it becomes that he was chosen to fill the space left by a dearly departed member who is deeply missed by his old friends. Regardless, the anxious newcomer gradually gets more comfortable with his new circle of friends, which includes not only fast-food loving Leo but the comfortably feminine Dink (Jack Kehler), spiritually conflicted former cleric Perry (David Wells), and mercurial Nick (Mark Fite), an out-of-work local who's convinced his best days are behind him. Over the course of their regular meetings something incredible happens to reclusive Joel - he finally realizes that even life's biggest problems don't seem quite so bad when you've got friends to fall back on in your time of need. ~ Jason Buchanan, Rovi

There are no critic reviews yet for Elephant Sighs. Keep checking Rotten Tomatoes for updates!

There are no featured audience reviews for Elephant Sighs at this time.