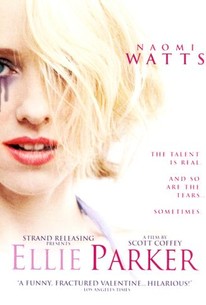 Despite some poignant commentary about struggling actors and Naomi Watts' inspired performance, Ellie Parker stutters in making the transition from short to feature length.

Naomi Watts produces and stars in Ellie Parker, a semi-autobiographical story of an Australian actress struggling to make it in Hollywood. Ellie is young enough to still schlep to auditions back and forth across L.A., changing wardrobes and slapping on makeup en route, but just old enough that the future feels "more like a threat than a promise." She lives with her vacant musician boyfriend (Mark Pellegrino), who leaves her just about as dissatisfied as any other part of her life, and has a loose definition of the word "fidelity." Helping make sense of their surreal and humiliating Hollywood existence is her best friend Sam (Rebecca Rigg), another out-of-work actress trying her hand at design, who attends acting classes with Ellie to stay sharp. When Ellie gets into a fender bender with a guy who claims he's a cinematographer (Scott Coffey), her perspective on her work and the dating world starts to change. Chevy Chase also makes an appearance in this series of Hollywood vignettes, playing Ellie's agent. Watts, Coffey, and Pellegrino all worked together on David Lynch's Mulholland Drive, where Watts had her breakout performance, and Ellie Parker grew out of the friendship forged between Watts and director/screenwriter Coffey. It was shot on digital video over the course of five years, having begun its life as a series of shorts featuring Watts' character. ~ Derek Armstrong, Rovi

Keanu Reeves
as Himself

Rob Mailhouse
as Himself

Kate Garwood
as Actress Before Ellie