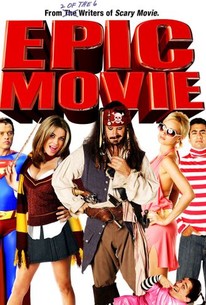 A crude comedy with nothing new or insightful to say about the subjects it satirizes.

Scary Movie screenwriters Jason Friedberg and Aaron Seltzer join forces to parody the "biggest" movies ever to hit the silver screen in this comedy that gives such popular box-office hits as Pirates of the Caribbean and Chronicles of Narnia: The Lion, The Witch, and the Wardrobe the same treatment that Scary Movie gave to the slasher subgenre. A virtual smorgasbord of spoof, Epic Movie tells the tale of four fully grown orphans: one the victim of snakes that attacked her plane, another raised by a kindly Louvre curator, the third a Mexican "libre" wrestling refuge, and the last an average mutant from an "X"-community. When the curious quartet visits a sprawling chocolate factory, they stumble across a magical wardrobe which transports them to the enchanted land of Gnarnia. It seems that the wondrous fantasy land has recently fallen under the spell of the evil White Bitch (Jennifer Coolidge), and in order to bring peace back to Gnarnia these four bumbling mortals will have to join forces with a charismatic pirate, a painfully sincere group of aspiring wizards, and one particularly libidinous lion.

Faune A. Chambers
as Susan

Kenny Yates
as Pirate With Heart