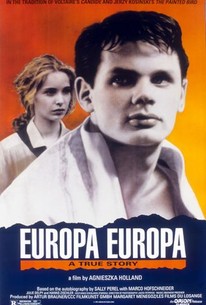 This drama was based on the true story of a young German Jew who survived the Holocaust by falling in with the Nazis. Solomon Perel (Marco Hofschneider) is the son of a Jewish shoe salesman coming of age in Germany during the rise of Adolf Hitler. In 1938, a group of Nazis attack Solomon's family home; his sister is killed, and 13-year-old Solomon flees to Poland. Solomon winds up in an orphanage operated by Stalinist forces; when German forces storm Poland, Solomon's fluent German allows him to join the Nazis as a translator, posing as Josef Peters, an ethnic German. In time, "Peters" is made a member of the elite Hitler Youth, but since Solomon is circumcised, he can be easily revealed as a Jew, and he lives in constant fear that his secret will be discovered. Solomon's close calls include an attempted seduction by Robert Kellerman (André Wilms), a homosexual officer, and his relationship with Leni (Julie Delpy), a beautiful but violently anti-Semitic woman who wants to bear his child for the glory of the master race. Europa, Europa (shown in Europe as Hitlerjunge Salomon) also features the real Solomon Perel, who appears briefly as himself.

Solomon Perel
as Himself