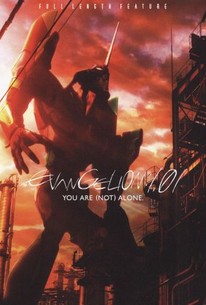 Evangelion 1.01: You Are (Not) Alone is the first installment in a film series known as the Rebuild of Evangelion that reinterprets the story first told in the critically acclaimed anime series Neon Genesis Evangelion. Covering the material from the first six episodes of the series, this film sets the stage when 14 year old Shinji Ikari arrives in Tokyo-3. His mother dead and his father painfully distant, Shinji is lonely, quiet, and wracked with torturous self-doubt. But Shinji's arrival in the city signifies his chance to prove himself as one of three teenagers chosen to pilot a series of technologically unprecedented robots called Evas, mysterious hybrids of man, spirit, and machine created to fight the unrelenting monsters known as Angels that continue to attack earth, one at a time. Thrown into battle before he's had so much as a day of training, Shinji's desperate need for his father's approval isn't helped by the pressure of the world's survival on his shoulders, or the difficult time he has living amongst the other pilots, who very strangely, have suffered the same losses that he has. Evangelion 1.01: You Are (Not) Alone directly follows the plot of the original series in some ways, but drastically diverges in others, focusing even more on the cryptic and symbolic nature of the story's religious themes. ~ Cammila Collar, Rovi