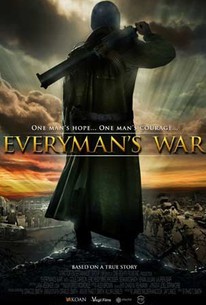 Inspired by a true story, director Thad Smith's snowbound World War II drama details the attack by the German 11th Panzer "ghost" division on the small town of Nenning, Germany, and one GI's noble attempt to ensure Allied forces maintained the upper hand in the Battle of the Bulge. In order to win the war, it's crucial that the Allies maintain control of Nenning. As Allied troops take their positions on the ridgeline surrounding the town, the snow begins to fall and the Germans launch a surprise attack. With dawn fast approaching and all communications cut off, Sgt. Don Smith (Cole Carson) realizes that Nenning is about to become the site of a bloody struggle, and that he must warn the locals to evacuate before the bullets start to fly. Cold, alone, and unarmed, Sgt. Smith summons every last ounce of courage he has to ensure victory and save lives. ~ Jason Buchanan, Rovi

Sean McGrath
as Benedetto
View All

There are no critic reviews yet for Everyman's War. Keep checking Rotten Tomatoes for updates!

There are no featured audience reviews for Everyman's War at this time.