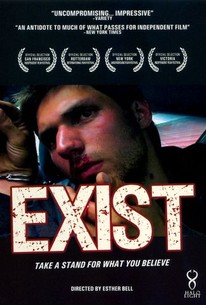 Exist: Not a Protest Film

A man on the run from the law wonders if he should betray a former ally in this independent drama. Top (Nic Mevoli) is a member of a political activist group who live and work together in an abandoned house in Philadelphia. Top, the son of a police officer, grew up poor and knows a few things about life on the streets, while Jake (Ben Bartlett), one of the group's spokesmen, is a Harvard dropout who comes from a wealthy and privileged background, which makes Top question his sincerity. One night, police raid the group house and a melee ensues, during which a cop is killed. Top and Jake go their separate ways afterward, each going underground to avoid arrest. However, when word spreads that Jake is suspected of having killed the officer, Top is pressured by his dad to find his former comrade and bring him to justice. Featuring a cast of real-life political activists, Exist: Not a Protest Film was written and directed by Esther Bell; Tunde Adebimpe from the alternative rock group TV on the Radio also appears in the film.

Critic Reviews for Exist: Not a Protest Film

Audience Reviews for Exist: Not a Protest Film

There are no featured audience reviews for Exist: Not a Protest Film at this time.

Exist: Not a Protest Film Quotes