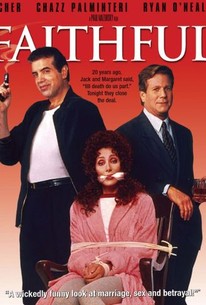 A depressed upper-middle class housewife finds herself marked for murder after her husband leaves for a business trip with his secretary in this dark-tinged comedy drama that was based on a popular Broadway by screenwriter/co-star Chazz Palminteri. Cher plays Margaret the housewife and after her husband leaves, she attempts to commit suicide in her beautiful spacious home. Unfortunately she is interrupted by Tony, the hit man (Palminteri), who immediately ties her up. He cannot kill her though until her husband Jack (Ryan O'Neill) calls to let him know he is safely away from the crime scene. The code will be two rings then nothing. After the killing, Jack will collect $5 million worth of life insurance. With the phone sitting silently, there is nothing left for Margaret and Tony to do but talk (the focus on dialogue betrays the story's theatrical roots). Their conversations cover a broad range of topics and at first Tony harshly derides her for allowing Jack to dominate her. Tony has his own problems too and occasionally pauses to call his therapist (played by director Paul Mazursky). It doesn't take too long though before romantic sparks between Tony and Margaret fly. During the course of their conversations, Margaret deftly toys with Tony's mind, casting doubts about exactly who hired him.

Steve Carreri
as Young Guy in Car
View All

There are no featured audience reviews for Faithful at this time.