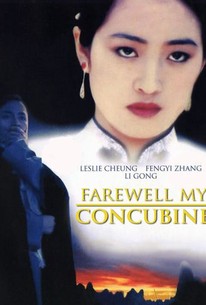 Chen Kaing's epic is grand in scope and presentation, and, bolstered by solid performances, the result is a film both horrifying and enthralling.

The story begins in the 1920s, and continues through to the aftermath of the Cultural Revolution. The early part of the film focuses on the training and adolescent relationships of two young men who are destined to perform in the famed Peking Opera. Due to the arduous and complex nature of their training, the story begins when one of them (nicknamed Douzi) (played as an adult by Hong Kong singer Leslie Cheung) is deposited at the school by his mother when he is quite a young boy. He becomes friends with a lad called Shitou (Zhang Fengyi as an adult), and their friendship goes through a variety of ups and downs occasioned by the fact that Douzi is homosexual, and Shitou is married. They do not ever appear to have had a sexual romance, but Douzi certainly resents his reduced access to his friend after he marries. Ironically, given the cooperative nature of this film's production, it was banned in Taiwan because too many of its stars were mainland Chinese.