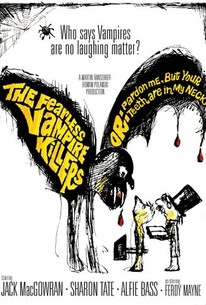 A pair of bumbling vampire-hunters attempts to destroy an undead nobleman and his cronies and rescue a buxom maiden in actor/director Roman Polanski's playful update of the venerable vampire genre. Bat expert and vampire obsessive Professor Abronsius (Jack MacGowran) barely survives his journey through the Alps into snowy Slovenia to continue his oft-maligned research into the undead. Thawed out by his hapless assistant, Alfred (Polanski), and the frisky local innkeeper, Shagal (Alfie Bass), Abronsius quickly notices the overabundance of raw garlic as a decorating motif in the inn and its environs. Too ineffectual to save Shagal from having his blood sucked, the professor and Alfred miss the boat again when the mysterious Count Von Krolock (Ferdinand Mayne) kidnaps Shagal's built, beautiful daughter, Sarah (Sharon Tate). The itinerant vampire hunters must travel through the icy wilderness to Von Krolock's abode and evade his manservant and his effete son Herbert (Iain Quarrier) before Sarah joins the ranks of the ghouls. They soon learn, however, that the luxury-starved lass actually enjoys her captors' lavish attentions. The action climaxes during a costume ball attended by a phalanx of blood-suckers, although the laughs and surprises continue until the very end. Sixteen minutes of unauthorized cuts have been restored in some video editions of The Fearless Vampire Hunters, although the animated credits sequence that replaced them is also retained. The film marks the feature debut of Tate, who replaced Polanski's original choice, Jill St. John, on the advice of producer Martin Ransohoff. ~ Brian J. Dillard, Rovi