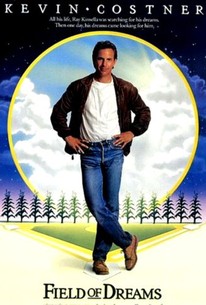 Field of Dreams is sentimental, but in the best way; it's a mix of fairy tale, baseball, and family togetherness.

1:58
Field of Dreams: Official Clip - If You Build It, He Will Come

"If you build it, he will come." That's the ethereal message that inspires Iowa farmer Ray Kinsella (Kevin Costner) to construct a baseball diamond in the middle of his cornfield. At first, "he" seems to be the ghost of disgraced ballplayer Shoeless Joe Jackson (Ray Liotta), who materializes on the ballfield and plays a few games with the awestruck Ray. But as the weeks go by, Ray receives several other messages from a disembodied voice, one of which is "Ease his pain." He realizes that his ballfield has been divinely ordained to give a second chance to people who have sacrificed certain valuable aspects of their lives. One of these folks is Salingeresque writer Terence Mann (James Earl Jones), whom Ray kidnaps and takes to a ball game and then to his farm. Another is Doc Graham (Burt Lancaster), a beloved general practitioner who gave up a burgeoning baseball career in favor of medicine. The final "second-chancer" turns out to be much closer to Ray. That "magical" field in Dyersville, Iowa still draws thousands of baseball-happy tourists each year. ~Rovi

Howard Sherf
as Man in Bar

News & Interviews for Field of Dreams

Critic Reviews for Field of Dreams

Audience Reviews for Field of Dreams