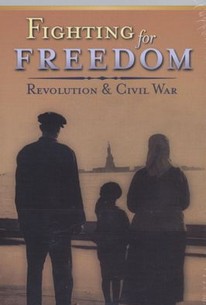 Filmmakers Phillip B. Kunhardt III, Nancy Steiner, and Peter W. Kunhardt explore the eternal struggle for liberty in America while simultaneously illuminating the hypocritical underlying factors that undermined the colonist's bold "experiment in freedom," in a revealing documentary featuring the voices of Brad Pitt, Martin Sheen, Michael Caine, Tom Hanks, Anthony Hopkins , Meryl Streep, Michael Douglas, Morgan Freeman, Robert Redford and many more. As the newly arrived British subjects staged the revolution that would cut loose their ties to Great Britain and give birth to a new era of freedom, a new hope for liberty emerged - but how then does one justify the presence of slavery in a society founded on the claim of all men being "created equal?" A blight on the quest for liberty and freedom that literally divided a struggling young nation right down the middle, slavery would be the last true obstacle in ensuring that the land of the free would truly live up to the ideals set forth by the founding fathers. As the north and the south set the stage for a bloody four-year war that would go down in history as one of the most brutal internal struggles ever waged, the resulting Civil War showed the willingness of Americans to actually stand up and fight to protect the rights of others as stated in the Constitution.

Anthony Hopkins
as Narrator
View All

There are no critic reviews yet for Fighting for Freedom: Revolution & Civil War. Keep checking Rotten Tomatoes for updates!

There are no featured audience reviews for Fighting for Freedom: Revolution & Civil War at this time.