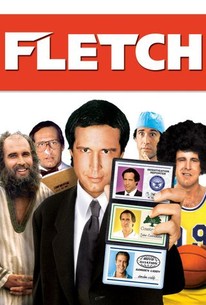 Quotably funny -- and fast-paced enough to smooth over the jokes that don't land -- Fletch is one of the best big-screen vehicles for Chevy Chase's brand of smug silliness.

Chevy Chase added a classic comic hero to the film landscape with Fletch, one of his few truly popular star vehicles in a famously misguided post-Saturday Night Live career. Chase plays Irwin M. Fletcher, known to everyone as Fletch, a Los Angeles Lakers-loving investigative reporter with a gleeful disdain for deadlines and a knack for pushing the buttons of his frustrated editor (Richard Libertini). He's also known for donning numerous disguises and assuming zany false identities to help gain information. While pursuing an ongoing story about a powerful drug dealer who operates from Venice Beach, he comes across an intriguing offshoot in which he becomes intimately involved. Aviation executive Alan Stanwyk (Tim Matheson) has an unusual proposition for Fletch: If Fletch agrees to an elaborate plan to kill him, for reasons Stanwyk refuses to divulge beyond explaining that he has bone cancer, Fletch will walk away with a healthy sum of money and a plane ticket to Brazil. Curious yet suspicious by profession, Fletch begins investigating Stanwyk's true motives, which leads him through numerous misadventures. Among them are a visit to a stuffy country club; a high-speed car chase with an unwitting passenger; repeat encounters with Stanwyk's wife (Dana Wheeler-Nicholson), although she may not be his only one; and a trip to Provo -- that's Utah, not Spain. Inspired by a novel of the same name by Gregory McDonald, Fletch went from thriller to comedy as it was adapted into a vehicle for Chase. ~ Derek Armstrong, Rovi

Kareem Abdul-Jabbar
as Himself

Chick Hearn
as Himself