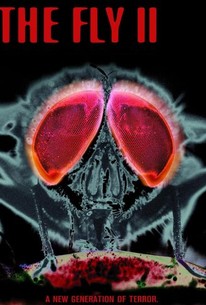 Chris Walas, the makeup and animatronics director on David Cronenberg's remake of The Fly, takes a stab at directorial duties in this sequel. Before Seth Brundle morphed into scrap metal in the original The Fly, he managed to leave behind the seed of his legacy, and at the start of The Fly 2 his son, Martin (Eric Stoltz), has suffered an accelerated growth, thanks to his fly genes. Although played by Stoltz, Martin is supposed to be only five human years old, and unaware of his imminent transformation into a fly. All his life, Martin has been confined to a laboratory at Bartok Industries, where evil CEO Bartok (Lee Richardson) plans to breed a new race of super flies. Martin spends his days working in the lab experimenting with teleportation. But then Martin meets Beth (Daphne Zuniga), an attractive researcher. Martin is attracted to her, but not only do his hormones kick in, so do his fly genes. Soon, Martin begins to transform into a bug just like his father. Desperate to stop his transformation, he wreaks revenge upon Bartok while trying the find a mate with which to swap his unwanted fly genes before it's too late.

Allan Lysell
as Guard 'A'

Garwin Sanford
as Observer #2
View All

Critic Reviews for The Fly II

Audience Reviews for The Fly II