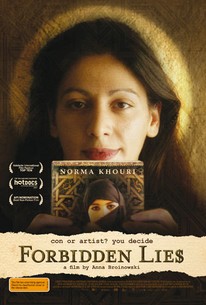 A thrilling and complex documentary about an international con-artist that's as confounded with the distinction between truth and lies as its wildly believable (and equally untrustworthy) subject.

In 2003 literary trickster Norma Khouri stealthily took readers for a ride with her captivating account of the doomed romance between her best friend Dalia and a Christian military man in Amman, Jordan. According to Khouri's literary fake Forbidden Love (released as Honor Lost stateside), Dalia was killed with impunity by her father when the enraged family patriarch discovered that his daughter was dating outside of the Muslim religion. Though the sham work rapidly established its author as a bold authority on the subject of women in Islamic society, Sydney Morning Herald writer Malcolm Knox punched a devastating hole in Khouri's credibility when he exposed the work as fraudulent a year after Forbidden Love's original publication. Despite an admittance that she did embellish some minor details, Khouri maintains that Dalia was a real person and that she's willing to do whatever it takes to prove it. Now, as Khouri, who claims to be thirty-four year old Catholic Jordanian virgin targeted for death by Islamic fundamentalists, travels back to Jordan in a last-ditch effort to regain her credibility, documentary filmmaker Anna Broinowski attempts to sort fact from fiction by speaking with both the author and her vehemently vocal detractors. ~ Jason Buchanan, Rovi

Critics Consensus: Fast & Furious Is Running On Empty
View All