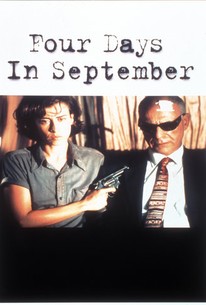 Bruno Barreto returned to his native Brazil after a ten-year absence to direct this fact-based political thriller that was nominated for a Best Foreign Language Film Oscar. Pedro Cardoso stars as Rio de Janeiro journalist Fernando Gabeira, who decides with his friend Cesar (Selton Mello) to take up arms with a radical leftist organization, MR-8, in 1969. The revolutionaries, who include the tough-talking and beautiful Maria (Fernanda Torres), are fighting to overthrow Brazil's brutal military government through civil unrest and guerilla tactics. Their first action, the robbery of a bank, is successful, although one group member is captured and tortured by Henrique (Marco Ricca), a secret service agent plagued by his conscience. As a follow-up to the heist, the MR-8 members kidnap the U.S. ambassador to Brazil, Charles Burke Elbrick (Alan Arkin). During four days of captivity, however, the kidnappers discover that their prisoner is a good-hearted man of conscience, causing Fernando to become increasingly uneasy about the group's plan to kill Elbrick if a demand for the release of political prisoners goes unheeded. O Que E Isso, Companheiro? (1997) was based on Gabeira's book of the same name but was released in the U.S. under the title Four Days in September.