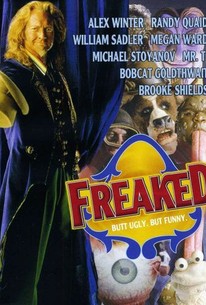 This rather warped but stylish little black comedy tells the story of Ricky Coogin, an avaricious, spoiled star who becomes the official spokesperson for the enormous Everything Except Shoes corporation without realizing that they are deliberately and irresponsibly marketing Zygrot-27, a deadly chemical fertilizer in Third World countries. To market the toxic green ooze, the actor is sent to Santa Flan, a small Latin American country with his best friend Ernie. The two are pursued by the actor's biggest, most obnoxious fan, Stuey Gluck. There Ricky meets American environmental activist Julie. He keeps his identity from the pretty girl secret for a time and the three of them travel together to Ricky's engagement. The trouble really begins when they stop to see Elijah C. Skuggs' roadside freak show. If they had known that Skuggs creates his "mutants" by dousing regular people with Zygrot-27 they might not have stopped. Unfortunately, they do and Ricky ends up turned into a disgusting creature and placed in a cage with the other "freaks." Things get even crazier after Ricky learns that he is about to be transformed into an evil super-freak and will be forced to kill his new companions on stage.

Bobcat Goldthwait
as Sockhead as Tourist/Sockhead

Lee Arenberg
as The Eternal Flame

Patti Tippo
as Rosie the Pinhead

John Hawkes
as Cowboy
View All