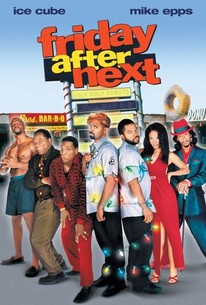 This Friday installment is more shapeless and stale than its predecessors.

Friday After Next Ratings & Reviews Explanation

Friday After Next Photos

The gang from Friday and Next Friday are back in this urban comedy, in which Craig (Ice Cube) and Day-Day (Mike Epps) have finally moved out of their respective parents' homes and gotten an apartment together. However, a bogus neighborhood Santa Claus (Rickey Smiley) decides to help Craig and Day-Day share the wealth by robbing their apartment, and when he rips off their stereo, he also makes off with their rent money, which was hidden in the speaker cabinets. Desperate to make rent and have some money for Christmas presents, Craig and Day-Day land jobs at a local strip mall, where their fathers, Mr. Jones (John Witherspoon) and Uncle Elroy (Don "D.C." Curry), have gone into business together running a barbecue joint. Craig and Day-Day are installed as security guards, and while Craig tries to make time with Donna (K.D. Aubert), a saleswoman at the Pimp N' Ho's Boutique, and keep things orderly at Holy Moly's Doughnut Shop, Day-Day attempts to transform himself into a master of crime-fighting, which causes a lot more problems than it solves. Friday After Next is the first feature film from director Marcus Raboy, who previously directed music videos for Sting, Li'l Kim, Staind, and Friday After Next star Ice Cube. ~ Mark Deming, Rovi

Reggie Gaskins
as Off. Dix

Joel McKinnon Miller
as Off. Hole

Brian Stepanek
as Officer No. 3

Jennifer Echols
as Church Lady No. 3

Jovun Fox
as Thugged Out Boy

Khleo Thomas
as Bad Boy No. 1

Quentin Prescott Price
as Juvenile No. 1

Darryl Graves
as Juvenile No. 2

Allen Maldonado
as Juvenile No. 3

Malieek Straughter
as Crime Brother No. 4

Amber Stuart
as Apartment Girl No. 2

News & Interviews for Friday After Next

Ice Cube Getting Janky for Dimension
Comic-Con 2006: Don’t Hold Your Breath on a "Shaun of the Dead" Sequel
Marcus Raboy to Helm "Whitebread"
View All

Critic Reviews for Friday After Next

Audience Reviews for Friday After Next

Friday After Next Quotes