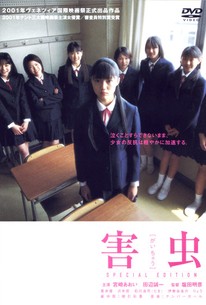 Following up on his acclaimed debut Moonlight Whispers (about a sadomasochistic relationship between two teens), Akihiko Shiota once again looks at troubled youth. Sachiko (played by Aoi Miyazaki of Eureka fame) is a 13-year-old junior high school student with a complicated family life. Her father left when she was an infant for a young mistress. Her mother (Ryo) -- a secretive and weirdly distanced woman -- works as a hostess and a kept woman for a mysterious gangster type. Sachiko finds some modicum of solace in the arms of her sixth grade teacher, Ogata (Seiichi Tanabe) who has a brief affair with her. As a result, he quits his job and starts working for a nuclear power plant far away. When her mother makes another halfhearted attempt at suicide, Sachiko's shattered emotional life becomes too much to bear and she drops out of school. Though she continues to correspond with Ogata, Sachiko is desperately lonely and alienated, leading to her consorting with other social dropouts. When her sole school friend Natsuko urges her to return to school, Sachiko finds that her long simmering rage against the world becomes difficult to control. This film was screened at the 2001 Toronto Film Festival. ~ Jonathan Crow, Rovi

There are no featured audience reviews for Gaichu at this time.