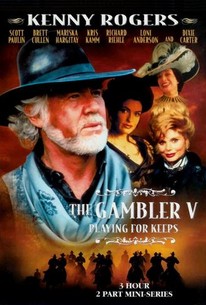 Kenny Rogers returns as Brady Hawkes, the Gambler, in this made-for-TV Western. Brady's son Jeremiah (Kris Kamm) is now an adult, and seems to have followed his father's footsteps into a life of adventure; however, Brady learns that Jeremiah has taken a far more dangerous path and has joined the gang of notorious outlaws Butch Cassidy (Scott Paulin) and the Sundance Kid (Brett Cullen). Fearing for his son's safety, Brady sets out to find his son and rescue him before he winds up on the wrong side of a gun. The Gambler V: Playing for Keeps also stars Dixie Carter, Loni Anderson, and Mariska Hargitay.

Kelly Junkerman
as Caldwell
View All

There are no critic reviews yet for Gambler V: Playing for Keeps. Keep checking Rotten Tomatoes for updates!

There are no featured audience reviews for Gambler V: Playing for Keeps at this time.