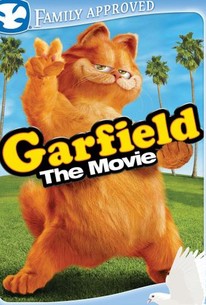 When the novelty of the CGI Garfield wears off, what's left is a simplistic kiddie movie.

Jim Davis' famous cartoon cat finally makes his way to the big screen in this adaptation of the popular comic strip Garfield, which combines live action with CGI animation. Jon Arbuckle (Breckin Meyer) is a sweet, if somewhat clueless, man who shares his home with his pet cat, Garfield (voice of Bill Murray). Garfield is not your ordinary tabby -- he's fat, he's smart-mouthed, he's arrogant, he won't do anything he doesn't have to, and would rather stuff himself with lasagna than do something Jon asks of him. Despite this, Jon loves his cat, but when he decides to expand his animal family, Garfield is less than enthusiastic about the presence of Odie, a lovably enthusiastic dog whose only flaw is his extreme stupidity. While Jon is crazy for Odie, and especially likes having two pets that necessitate periodic visits to Dr. Liz Wilson (Jennifer Love Hewitt), a veterinarian he has a crush on, Garfield decides to remove Odie from the picture. Garfield arranges for Odie to become the property of Happy Chapman (Stephen Tobolowsky), a television host who acts like an animal lover on the round-cornered screen but doesn't much like pets on his own time. While Garfield at first enjoys ruling the roost again, he soon realizes the error of his ways, and in a rare example of selfless and ambitious behavior, hatches a plan to rescue Odie from Chapman. Garfield also features the voice talents of Debra Messing, Brad Garrett, Jimmy Kimmel, and Alan Cumming.

Mo'Nique
as The Rat

News & Interviews for Garfield - The Movie

Critic Reviews for Garfield - The Movie

Audience Reviews for Garfield - The Movie