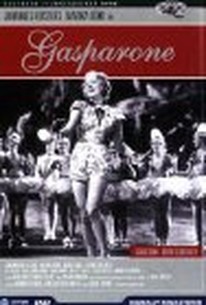 Gasparone was one of several George Jacoby-directed movies designed to promote the film career of musical-comedy star Maria Rokk. Although the casting of Fraulein Rokk was at first opposed by German propaganda minister Joseph Goebbels, he eventually and mysteriously relented, though it certainly wouldn't be the last time that movie casting decisions would be made by the mercurial Goebbels. The story concerns a nationwide manhunt for a robber and woman-abductor called "Gasparone". In fact, there is no such person: Gasparone has been invented to keep the cops busy whenever restauranteur Massacio (Oskar Sima) is receiving his latest shipment of contraband coffee. Helping Massacio pull off this subterfuge is his pretty niece Ita (Rokk). The plot thickens when a handsome stranger (Johanne Heesters) is accused of being the elusive Gasparone. Appearing as Maria Rokk's screen partner is Leo Slezak, the opera-star father of Walter Slezak. Gasparone proved to be yet another hit for Rokk and Jacoby, who would later solidify their collaboration via marriage.

There are no critic reviews yet for Gasparone. Keep checking Rotten Tomatoes for updates!

There are no featured audience reviews for Gasparone at this time.