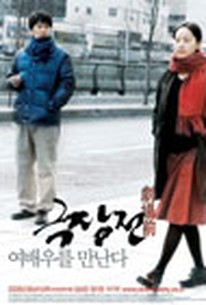 South Korean auteur Hong Sang-soo generally tells the same story twice, and his work often involves people working in the film industry. His sixth feature, Tale of Cinema, follows this pattern, but Hong adds a new wrinkle. In the first half, we're introduced to Sang-won (Lee Gi-woo of The Classic), who seems to be a ne'er-do-well, and happens to run into Yong-sil (Eom Ji-weon), whom he had a crush on back when they were in school. While she finishes out her workday, he goes to see a play. The two spend the evening together, getting very drunk. After an abortive effort at lovemaking ("Why insist when it doesn't work?" says Yong-sil), Sang-won tells Yong-sil that he'd like to "end with a flourish." She agrees, and the two forge a suicide pact. Their plan goes awry, and Sang-won is hospitalized. He returns home and has a big argument with his angry mother. We next see a new character, Tong-su (Kim Sang-gyeong of Memories of Murder and Hong's Turning Gate) as he exits a movie theater. It soon becomes clear that the first half of the Tale of Cinema is the short film that Tong-su has just watched, as part of a retrospective of the work of a peer from film school. The filmmaker has fallen ill and his classmates are having a get-together to raise money for his family. Tong-su doesn't seem interested in going until he runs into Yong-sil, the actress from the short film, who has had some success in the intervening years. He stalks her for a while, and eventually introduces himself and explains to Yong-sil that the filmmaker stole the story of the film from Tong-su's stories of his own life. Tale of Cinema was shown at the 2005 New York Film Festival. ~ Josh Ralske, Rovi