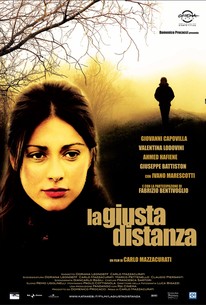 The title of Carlo Mazzacurati's tense and moody small-town drama La Giusta Distanza (AKA The Right Distance, 2007) refers to a writer's need to maintain an appropriate amount of professional "distance" from his or her subject; the journalist in question here is Giovanni (neophyte Giovanni Capovilla), a late adolescent with a flair for journalistic correspondence. As the story opens, Giovanni attaches himself to a big city paper and agrees to cover events that transpire in his Po River Valley hamlet. Meanwhile, the arrival in town of fetching teacher Mara (Valentina Lodovini) turns more than a few heads, including Giovanni's and that of Hassan, a local immigrant mechanic from Tunisia. Mara herself just happens to be single, but finds a dearth of acceptable suitors in the community, except for Guido, a bus driver; problem is, he's already romantically involved with another. Mara then finds Hassan spying through her window one night; she manages to overlook this, however, and then - on an ill-advised note - begins a romance with the mechanic, without recognizing the extent of what she's getting herself into. ~ Nathan Southern, Rovi

There are no critic reviews yet for La Giusta distanza (The Right Distance). Keep checking Rotten Tomatoes for updates!

There are no featured audience reviews for La Giusta distanza (The Right Distance) at this time.