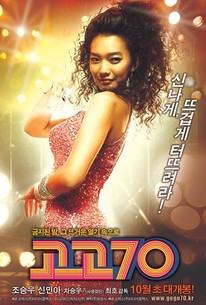 The 1970s marked an unusual period in Korea - one marked by repressive, autocratic dictatorship, but also by a tremendous surge in youth culture and a youth-driven renaissance in pop music. As directed by Choi Ho, the Korean-language musical drama Go Go 70s transports viewers back to that very specific time and place. Jo Seung-woo and Cha Seung-woo star, respectively, as vocalist Sang-kyu and guitar player Man-sik, who after wandering through a run-down American military camp decide to form their own rock band, "The Devils." The group scores an immediate, smashing success with their first gig, and even greater popularity with the addition of a fashion-conscious dancer, Mimi (Sin Min-ah). This proves all too short-lived, however, when one of the members dies in a fire at the local club and the group members receive the devastating news that the government is planning to shut down many of the local nightclubs. Undaunted, the musicians resolve to continue singing and playing.

Seung-woo Cho
as Sang-gyoo, The Devils guitar and vocal

There are no critic reviews yet for Go Go 70's. Keep checking Rotten Tomatoes for updates!

There are no featured audience reviews for Go Go 70's at this time.