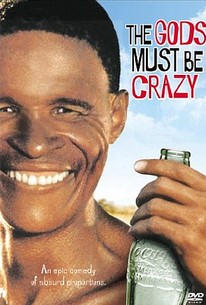 The Gods Must Be Crazy

The Gods Must Be Crazy Ratings & Reviews Explanation

Kalahari bushman Xi (played by genuine bushman N!xau) is as surprised as the rest of his tribe when a Coke bottle, thrown from a passing plane, lands in the middle of their village. This "gift from the gods" proves to be a mixed blessing when the tribesmen fight over it and eventually use it for a weapon. To keep peace in the village, Xi is assigned to take the bottle to "the end of the earth" (actually a lush valley) and throw it back to the gods. Meanwhile, back in urbanized South Africa, Kate Thompson (Sandra Prinsloo) leaves her office job in the city to take a job teaching Kalahari children; once in the wilderness, she finds herself constantly bumping into clumsy microbiologist Andrew Steyn (Marius Weyers). And meanwhile, maniacal Sam Boga (Louw Verwey) is leading a military coup against the government. How do all these various and wildly divergent characters fit together? You'll have to see The Gods Must be Crazy yourself--if you haven't seen it already. This Botswanian comedy/melodrama was directed by Jamie Uys, who had helmed dozens of films before Gods and would make many more afterwards. Originally slated for limited domestic distribution in 1982, Gods Must Be Crazy was picked up for American consumption by 20th Century-Fox in 1984. Within a few weeks, "word of mouth" transformed Gods into the biggest foreign boxoffice hit ever released in the U.S. The 1989 sequel didn't do quite as well, indicating that perhaps the bloom was off the rose for N!xau and his confreres. ~ Hal Erickson, Rovi

News & Interviews for The Gods Must Be Crazy

Critic Reviews for The Gods Must Be Crazy

Audience Reviews for The Gods Must Be Crazy

The Gods Must Be Crazy Quotes