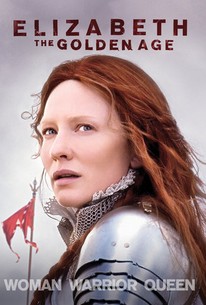 This sequel is full of lavish costumes and elaborate sets, but lacks the heart and creativity of the original Elizabeth

"The Golden Age" finds Queen Elizabeth I facing bloodlust for her throne and familial betrayal. Growing keenly aware of the changing religious and political tides of late 16th century Europe, Elizabeth finds her rule openly challenged by the Spanish King Philip II--with his powerful army and sea-dominating armada--determined to restore England to Catholicism. Preparing to go to war to defend her empire, Elizabeth struggles to balance ancient royal duties with an unexpected vulnerability in her love for Sir Walter Raleigh. But he remains forbidden for a queen who has sworn body and soul to her country. Unable and unwilling to pursue her love, Elizabeth encourages her favorite lady-in-waiting, Bess, to befriend Raleigh to keep him near. But, this strategy forces Elizabeth to observe their growing intimacy. As she charts her course abroad, her trusted advisor, Sir Francis Walsingham, continues his masterful puppetry of Elizabeth's court at home--and her campaign to solidify absolute power. Through an intricate spy network, Walsingham uncovers an assassination plot that could topple the throne. But as he unmasks traitors that may include Elizabeth's own cousin Mary Stuart, he unknowingly sets England up for destruction.

Cate Blanchett
as Queen Elizabeth I

Exclusive: Inside Pinewood/Shepperton – A Photo Tour
RT on DVD: The Brave One, Assassination of Jesse James Fire Onto DVD
Atonement Leads Golden Globe Nominations
View All