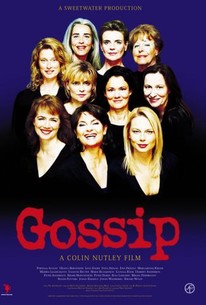 Nine of Sweden's leading actresses are brought together in this unconventional comedy-drama about a group of actresses awaiting a casting announcement. A major American film producer is looking for a Swedish actress to play the title role in a big-budget remake of the classic Greta Garbo vehicle Queen Christina, and a handful of women who were in talks for the role wait with bated breath for the decision to be declared. Rebecca (Lena Endre), married to hunky matinee idol Ake (Mikael Persbrandt), is spending her 40th birthday waiting for word on the role. Alexandra (Suzanne Reuter) will be shooting a TV commercial, to be directed by Rolf (Brasse Brannstrom). Rolf used to be involved with Cecilia (Marie Richardson), who lately is nearly as well known for the fact that she's pregnant and not identifying the father as she is for her acting. Cecilia appears on a morning chat show with Georgina (Ewa Froling), who used to be in love with Gregor (Peter Haber), Alexandra's current husband. Stella (Helena Bergstrom) is a defiantly out lesbian who is having an affair with Karin (Marika Lagercrantz), the wife of film director Magnus (Rolf Lassgard). Stella also happens to be starring in Magnus' latest project, along with Ake and Molly (Pernilla August). Meanwhile, Git (Gunilla Roor) is in a session with her analyst, trying to come to terms with her feelings about her work, and Evior (Stina Ekblad) is in rehearsal for a musical, and reaching the regrettable conclusion that she can neither dance nor sing. In keeping with the film's tangled onscreen relationships, Helena Bergstrom, who plays a lesbian sleeping with her director's wife, is married to Colin Nutley, Gossip's writer and director. ~ Mark Deming, Rovi

There are no critic reviews yet for Gossip. Keep checking Rotten Tomatoes for updates!

There are no featured audience reviews for Gossip at this time.