Grace of My Heart 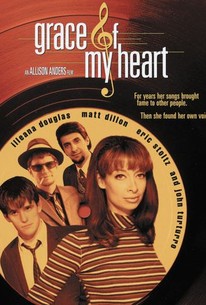 Grace of My Heart

Grace of My Heart Photos

Illeana Douglas delivers a superb performance as Denise Waverly, a fictional singer and songwriter whose life bears more than a passing resemblance to that of real-life pop star Carole King. Edna Buxton, the daughter of a Philadelphia steel tycoon, aspires to a career as a singer, and when against her mother's bidding she sings a sultry version of "Hey There (You With the Stars in Your Eyes)" (instead of Mom's choice, "You'll Never Walk Alone") at a talent contest, she wins a recording contact and moves to New York City. She cuts a record and gains a new stage name, Denise Waverly; however, she soon finds that girl singers are a dime a dozen in the Big Apple and her career as a vocalist goes nowhere. But she has a knack for writing songs, and eccentric producer Joel Milner (John Turturro) asks her to pen some songs for his upcoming projects. Teamed with Howard Caszatt (Eric Stoltz), a hipster songwriter who wants to express his political and social ideals through pop tunes, she finds both a successful collaborator and husband. While her work with Howard gains Denise writing credits on a string of hit records and respect within the industry, their marriage falls apart, and she becomes involved with Jay Phillips (Matt Dillon), the gifted but unstable leader of a popular West Coast surf music combo. Students of pop music history will have a ball with the various characters modeled after real-life rock legends, and the 1960s-style song score includes numbers written by Joni Mitchell and J. Mascis (of the band Dinosaur Jr.), as well as one-time King collaborator Gerry Goffin; a collaboration between Elvis Costello and Burt Bacharach, "God Give Me Strength," led to a full album written by the two great tunesmiths.

Diane Robin
as Waitress In Diner

Drena De Niro
as Receptionist No. 1

Amanda De Cadenet
as Receptionist No. 2

Jeffrey McDonald
as Member of the Riptides

Steven McDonald
as Member of the Riptides

Brian Reitzell
as Member of the Riptides

Melanie A. Gage
as The Riptides' Dancing Girl

J Mascis
as The Riptides' Engineer

China Kantner
as Singer On Beach

Paige Dylan
as Singer On Beach

Alicia Jaffee
as Singer On Beach

Alice Cohen
as Singer In Tree

Lita Hernandez
as Singer In Tree

Delia Gonzalez
as Singer In Tree

Critic Reviews for Grace of My Heart

Audience Reviews for Grace of My Heart

Grace of My Heart Quotes