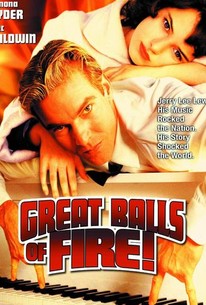 Until its last ten minutes or so, this filmed biography of controversial recording star Jerry Lee Lewis plays like a live-action cartoon. As played by Dennis Quaid, "the killer" is a very mixed-up individual: a saintly sinner, a world-wise naïf, a skilled performer with zero sense of discipline, a loving husband who uses his wife for a punching bag. The story takes place during the years 1956 through 1958, as Lewis rises to the top of the charts with such hits as "Crazy Arms," "A Whole Lotta Shakin' Goin' On," and the title tune. Along the way, he falls in love with his second cousin, Myra (Winona Ryder), eventually marrying the girl. When it is revealed that Myra is only 13 years old, Lewis is condemned as a molester and pervert by the public (his disastrous tour of England during this crisis is depicted in hilarious Tex Avery fashion). After establishing a brisk, satirical tone through most of the proceedings, the film plummets into heavy dramatics in its final portions, jarring disastrously with all that has gone before. Otherwise, Quaid is terrific as Lewis (expertly lip-synching to the original records,) and Ryder is equally good as the long-suffering Myra. Featured in the cast are Alec Baldwin as Jerry's cousin Jimmy Swaggart (the same!), Michael St. Gerard as Lewis' great rival Elvis, and Steve Allen as himself.

Steve Allen
as Himself

David A. Penhale
as Reporter #1