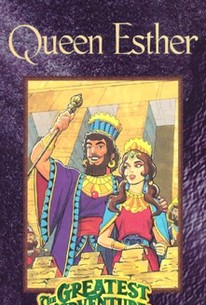 This Hanna-Barbera animated video tells a version of the Bible story about Esther, whose heroism is commemorated annually by the feast of Purim. Esther, a Jewish orphan girl, is chosen by King Ahasuerus of Persia to be his queen. Meanwhile, the king's counselor schemes to bring about the death of Jews throughout the realm. With the help of God, her courage, and her wits, Queen Esther devises a plan that saves her people.

There are no critic reviews yet for Greatest Adventure Stories from the Bible: Queen Esther. Keep checking Rotten Tomatoes for updates!

There are no featured audience reviews for Greatest Adventure Stories from the Bible: Queen Esther at this time.